Well, there was always part of me that was wishing that we would somehow immediately know when we had entered the system containing the infamous Sa-Matra, but encountering a bunch of Ur-Quan and Kohr-Ah holding hands on a “merry-go-round” wasn’t exactly what I had in mind!

I of course immediately established a time portal entry point before we proceeded, and we set course for the uh… circle of death. 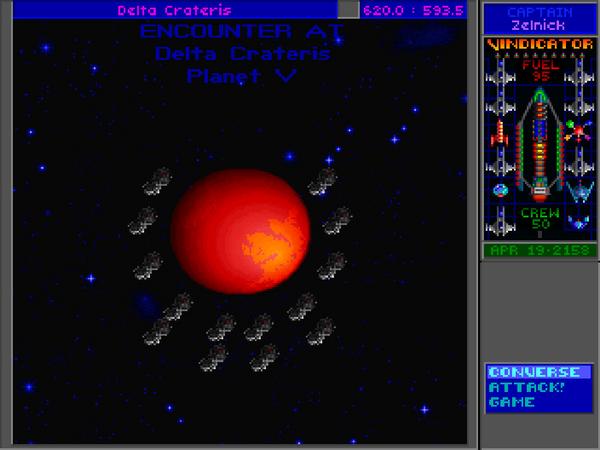 Not wanting to face 14 Kohr-Ah Marauders, I activated the time portal so we could try again as the Kohr-Ah began hurtling some name-calling in our direction:

“FILTH! You may NOT approach the Sa-Matra. Your death was inevitable, but now it is also imminent.”

The second time around we approached more cautiously, and we made our way to the other side of the circle so our sensors could focus in and magnify their circular perimeter: 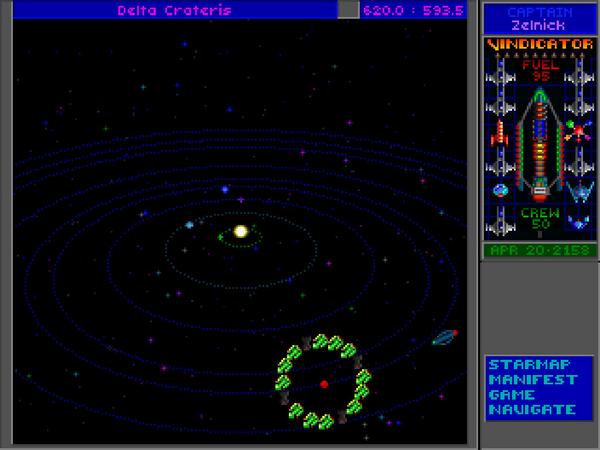 Incidentally, it also allowed us to be more selective in our approach of the massive horde: 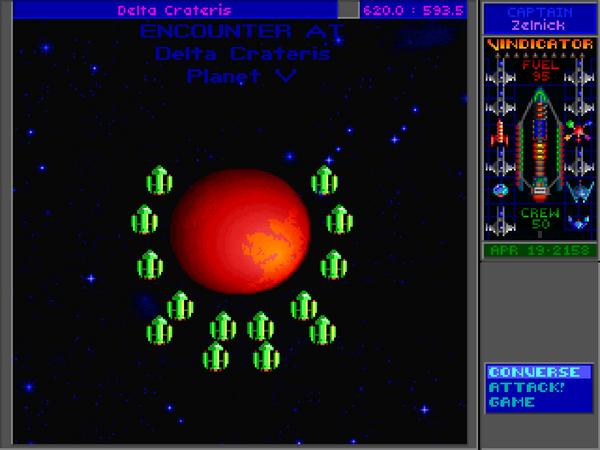 There! That’s much better. Well, sort of…

The Ur-Quan Kzer-Za, much like the Kohr-Ah, also didn’t want us to approach the Sa-Matra, which they referred to as their “symbol of Ur-Quan dominance.” We fought off all 14 Dreadnoughts with the Vindicator, and our flagship only took one Fusion Bolt during the entire battle, and that was only due to an Ur-Quan warping in at weapon’s range and already pointing in our direction before we could get up to top speed.

We didn’t even bother with crew transfers, choosing to instead focus our attention and efforts into quickly moving through the circular line of Ur-Quan. We remained at action stations in anticipation of the entire ring enclosing around us to prevent our escape, but they remained content in their circular motion as we continued on course towards the planet… but then, something came up on sensors as we neared closer: 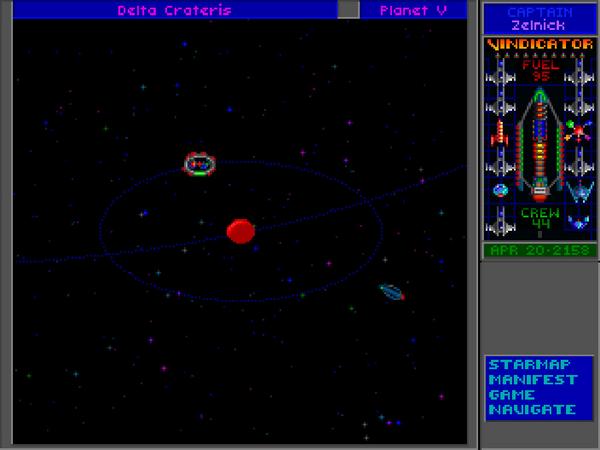 It doesn’t look like we’ll be fighting the Sa-Matra today.
Well, this has been fun, but I think it’s time to go: 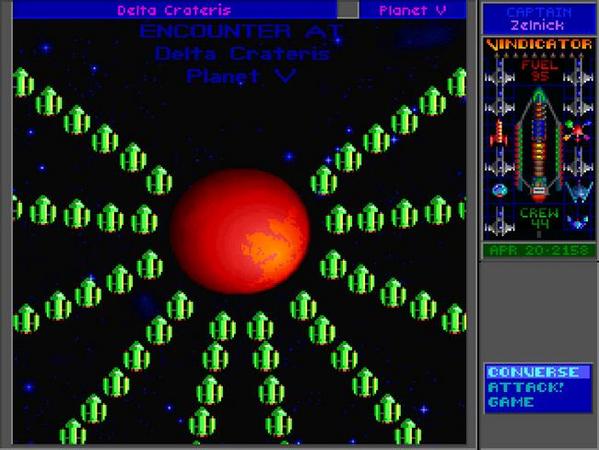 Well, this never happened, so the plan is to continue exploring, and building alliances to tackle this ... thing.
Top

What does your artifact inventory contain? It's kind of hard to track over the hundred pages...
To be angry is to punish yourself for the errors of others.
Top

Alvarin wrote:What does your artifact inventory contain? It's kind of hard to track over the hundred pages...

I believe he is missing the helix, the sphere, the toad, and everything downstream of those items.
Top

Interesting that the planetary view shows the planet instead of what's actually there.
Top

Well, a fight would be around the planet, not around the comparatively light-massed thing that is actually there.
Top

krulle wrote:Well, a fight would be around the planet, not around the comparatively light-massed thing that is actually there.

Not to mention, seeing as the Sa-Matra is more or less sacred by Ur-Quan standards, they clearly wouldn't want you to get anywhere near it. Nor would you want to do so yourself, since you'd just be torn to ribbons. It all makes sense when you think about it.
"Sentient life. We are the Ur-Quan. Independence is intolerable. Blah, blah, blah." - the Spathi High Council, Star Control II.
Top

Alvarin wrote:What does your artifact inventory contain? It's kind of hard to track over the hundred pages...

I currently have the Quasi Portal, Sun Device, Clear Spindle, Umgah Caster, Taalo Shield and 3 Mycon Egg Cases. I also have the Probe Self-Destruct Program, although it doesn’t show up in the device inventory.

I also previously held the VUX Beast, Shofixti Maidens, Syreen Shuttle, and obviously the Warp Pod, but those devices have been since used within the game, and I assume you already know what was accomplished with their usage.


Death 999 wrote:Interesting that the planetary view shows the planet instead of what's actually there.

I noticed that too, especially since one of the main reasons I set out on this preconceived doomed notion was to establish what terrible monstrosity I am expected to defeat, and I figured I would get to set me eyes upon it before it demolished us, but I only got a glimpse of it. At least I now understand completely the necessity of distracting the Ur-Quan before making it to the Sa-Matra, and I have a good idea where to head on that front.

We escaped from the massive wall of Dreadnoughts as we veered off from the direction of the Sa-Matra, but the outer guardians were starting to come as well, and the shrinking circle of green ships heading for us was going to be tough to evade, so we switched course and headed for the nearby planet to try and shake them off, if only temporarily.

That planet turned out to be a Magma World with class 7 tectonics and 2 base metals, but nothing is coming up on energy scans, so I guess the Ur-Quan picked a random planet to store their big battleship, and this one was the lucky winner!

Still while in Delta Crateris, we noticed there was a “hole” that we had left in the Ur-Quan circle after we had destroyed an entire 14 Dreadnought guardian squadron, so we zoomed through and left planetary range, only to find ourselves dodging the 4 sets of Kohr-Ah Marauders still engaged in their “ring around the rosie” circular motion outside the planet.

Once outside the system, we were confronted by a group of 3 Marauders, but we still hadn’t made the crew transfers to the Vindicator, which by the way had taken another fusion bolt blast from the endless set of Ur-Quans surrounding the Sa-Matra before we could activate the emergency warp-out, so I didn’t feel comfortable about sending in our flagship, so we sent in some Avatars instead.

The Avatars did their job, but each time one of them destroyed a Marauder, most, if not all, of their ZapSats were destroyed during the skirmish, leaving them very vulnerable to a subsequent attack, plus their crew was depleted somewhere between a third to over half, so we’d have them retreat and replace them with a fresh Avatar until the battle was finished.

After the final Kohr-Ah had fallen, we returned to HyperSpace and quickly activated the Quasi Portal before another nearby group could hold us in the increasingly dangerous Crateris area. Once inside the safety of the green space, we made all of the necessary crew replacements as we licked our wounds, so the Vindicator is back to 100% and 2 of the weakened Avatars’ crew were transferred to fill up one of the others back to full strength.

Before we headed back for Starbase, I wanted to see if the Chmmr could offer us some more advice. After all, we accomplished one of the tasks they required for us by tracking down and finding the Sa-Matra, so I wanted to see if they could give us any more insights, since our ship’s databanks would show proof that we had found the wretched thing.

Unfortunately, all the Chmmr seem to be concerned with is for us finding the resources they want us to gather; an impression I keep getting, considering every time they greet us they’re always quick to tell us to leave and go find the bomb and distraction item. Curses, I was hoping for more.