We escaped the Umgah homeworld with everyone intact (including our newly volunteered Umgah Drone!) but we were soon intercepted by more Umgah as we left range of the planet, and they were accusing of stealing their arms… and no, not arms as in weapon armaments, but their actual arms, but then they realized they never had any arms, but we took care of them with no trouble, and now they definitely don’t have any arms… or tentacles, or mouths and eyes for that matter!

We exited the system, but there were more Umgah ships waiting for us outside, but it was as though they had reconsidered attacking us, since they admitted that they hadn’t been very nice to the people who after all had saved them from unwillingly continuing to perform as mindless slave puppets for the Dnyarri, so they announced that they were making me honorary king! But… wouldn’t you know it? -- Just as soon as the crown was touching the temple of my head there was a loud, sounding of a horn booming, which at first, I thought was merely a nice way to conclude the ceremony, but in fact it was the “king-killing horn”, who’s ill-timed blare representing the intended demise of the chosen monarch has just so happened to coincide with my coronation. I hate these crazy, stinkin’ Umgah! (even if they are kind of funny sometimes!)

Anyway, so we blasted away some more blobs and activated the Quasi Portal to head for home. However, as soon as we entered QuasiSpace, I noticed that the naturally occurring dimensional portal was present, since it was still within the short time of the month when it stays open, so I ordered us to enter, and we waited for almost a week on the other side for some Arilou to arrive, but when they finally did, they really didn’t have anything new to share, so we returned to HyperSpace and we headed for Farararara-land, I mean, the Arilou homeworld, but when we got there the Arilou there also didn’t have anything new to share, plus we’re still too numbness-susceptible to visit the surface, so I activated the time portal to undo the pointless 2-week detour, and we proceeded towards Sol. Darn! I thought that maybe the Arilou would give us some additional insights concerning the Talking Pet, considering they were ones who initially found the thing! Oh well.

In answer to your earlier question: The Umgah will fill every available slot in your fleet with a Drone before they attack. How courteous!
Top

Draxas wrote: ↑Wed Aug 01, 2018 5:25 pm In answer to your earlier question: The Umgah will fill every available slot in your fleet with a Drone before they attack. How courteous!


Interesting. I may have to go back in time and check that one out for myself!

While the Vindicator was being refueled to get ready for our next mission, I got together with Commander Hayes so we could both go over the scientists’ analysis about “Danny” the Dnyarri, and this is what he had to report:

“The analysis reads as follows:
SUBJECT: Talking Pet Lifeform.
DATA: This creature is physiologically identical to the so-called Ur-Quan ‘Talking Pet’, with one notable exception:
It is highly intelligent, and evidences strong psychic capabilities.
Initial AIQR tests rated it well above human super-genius, though immediately after we made this shocking assessment, its scores dropped to the normal-sub-normal range.
Interviews with the subject have shown it to be cooperative, though a class-IV pan-species psychological profile places the creature far into the ‘Furtive-Hateful’ domain.
There were also some disturbing incidents where we talked about roses, daisies, and other pretty flowers!
SUMMARY: Everything’s okay! Nothing to worry about with this cuddly little guy.
Not one thing!
That’s the end of our scientists’ report.”

Hmmm… informative, yet highly disturbing. It’s obvious that he’s intelligent, but unfortunately, he’s equally as deceptive and generally evil, not to mention very powerful and extremely dangerous, but what he’s told us may very well be true: He could be the secret weapon for us to use against the Ur-Quan. Scary… but perhaps true.

Our next destination lies in Yehat space, since we still need to initiate the Yehat rebellion, so they can hopefully fuel an uprising amongst themselves, overthrow the Queen, and decide collectively to aide us in our efforts to defeat the Ur-Quan, plus it would be nice to gain another Terminator or two into our fleet like we had before time reversion.

To that end, we have decommissioned one of our Arilou Skiffs, the Country Biscuit, a Pkunk Fury (which are all named a variation of the word ‘Bgak!’) and also a Spathi vessel, the StarGazer, even though we won’t be able to build more Spathi vessels here in the Shipyard (but we’ve still got Fwiffo!) and the other two kinds can only be received as gift ships, but we’ll need to make some room for recruiting some Yehat rebels.

We could keep as many as 3 ship slots open, but I decided we should build a Syreen Penetrator, and so the H.M.S. Stiletto is being constructed as we speak, so our fleet will consist of one of each of the races we have forged alliances with (more or less) which includes (in chronological order of acquisition) Spathi, Pkunk, Orz, Zoq-Fot-Pik, Arilou, Shofixti, Thraddash, Umgah and Syreen. (we also have a cruiser)

We have also christened the Umgah Drone the H.M.S. Slapstick. Seems fitting.

Draxas wrote: ↑Wed Aug 01, 2018 5:25 pmThe Umgah will fill every available slot in your fleet with a Drone before they attack

I thought they maxed out at four.
Top

I never did too much experimentation with it, but I am pretty sure I have received more than that on at least 1 occasion.
Top

I also remember only ever getting four max.
To be angry is to punish yourself for the errors of others.
Top

I went back to an earlier save, which was when I went Umgah homeworld to encounter the Dnyarri for the first time and allowed the 10th brainwashed Umgah to destroy my fleet. Then, I went back, zipped through the dialogue, obtained Talking Pet, went back again and zipped through the ‘Great Hero/Enemy’ dialogue and… Voilà! 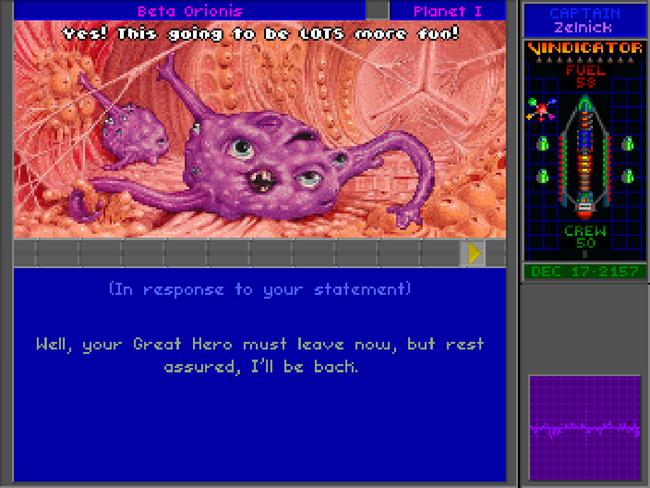 Yup, it’s four, but I suppose there could be other versions or mods that were programmed to allow you to receive more.

4 does seem to be consistent though… I believe the Pkunk, Arilou and ZFP will all hand over 4 ships as well. Maybe the Yehat rebels give 4 too, but I’m not sure, since I only had room to add two Terminators at the time. Speaking of which…

We arrived at Theta Serpentis on January 9th, 2158, but we still had the auto-pilot engaged, so we automatically entered the system, but since there weren’t any Yehat visibly inside, we turned around and headed back out. Less than a day later, back in HyperSpace, we were able to contact the Yehat. Hmmm… it's fortunate that the first Yehat we've encountered when bringing forth a Shofixti have both times been those from a sympathetic clan whose position could be swayed.

Then it was as quick as that, since I had already done all of this before and have the information recorded, it was like BAM! The Yehat Revolution was triggered, followed by the next several days of us avoiding loyalist Yehat factions as we made our way through their territory to find some friendly Yehat in the rebel territory on the other side, near the star Epsilon Scuti, where we easily convinced a few Yehat vessels to join our fleet.

They told us of all the events which led up to the collapse of the noble Yehat empire and the abandonment of the Shofixti, even though some of their statistics and claims seemed a bit exaggerated, like when they said the Shofixti used their super bomb to destroy the outer layer of the sun, which caused plasma to shoot out from it, which all is believable, except for the part where it subsequently destroyed a third of all the Ur-Quan’s ships. I’ve heard from other sources it was more like twelve ships, but then again, those were battle thrall sources, so whatever.

Speaking of nova-causing bombs, they told us how the bomb had been discovered by the Shofixti, and they also shared some details about the bomb itself, describing it as being black and cylindrical and approximately the size of one of our landers. They also said it had a ton of ancient writing scribbled all over it, but even though they couldn’t interpret it directly, it was clearly placed there as a warning of its immense danger.

They talked with us some more, sharing interesting things here and there, including ZEX and his genius during the War, and spoke a little about the Sa-Matra, and the Yehat are also positive that its destruction needs to be our primary focus, and I couldn’t agree more.

We activated the Quasi Portal and exited through the wormhole on January 19th, which brought us within striking distance of the Crater Constellation, and we set course for Delta Crateris, keeping a lookout all the while for any Ur-Quan or Kohr-Ah ships lurking nearby, but we didn’t detect any bogeys on monitors until we were already right upon system entry.

Unfortunately, the Dnyarri refused to help. He said it was too early to implement the plan to attack the Sa-Matra, since we didn’t have anything sufficient enough to blow it up. I considered revealing my ability to move back and forth through time with the Vindicator’s time travel device, so this was really only an experiment to get a better reading on the thing, but I thought better against mentioning it. I shudder the thought of Danny having knowledge of such things.

Arilou give up to 3.


I’ve heard from other sources it was more like twelve ships, but then again, those were battle thrall sources, so whatever.

It was 'dozens', but still.
Top

The Troglodyte wrote: ↑Fri Aug 03, 2018 2:08 pm4 does seem to be consistent though… I believe the Pkunk, Arilou and ZFP will all hand over 4 ships as well. Maybe the Yehat rebels give 4 too, but I’m not sure, since I only had room to add two Terminators at the time. Speaking of which…

I know for sure that the Arilou and Yehat max out at 3. ZFP and Pkunk give 4.

Should be interesting which lead you pursue next. There aren't a whole lot of unfollowed ones left.
Top

The Troglodyte wrote: ↑Fri Aug 03, 2018 2:08 pm4 does seem to be consistent though… I believe the Pkunk, Arilou and ZFP will all hand over 4 ships as well. Maybe the Yehat rebels give 4 too, but I’m not sure, since I only had room to add two Terminators at the time. Speaking of which…

I know for sure that the Arilou and Yehat max out at 3. ZFP and Pkunk give 4.

Should be interesting which lead you pursue next. There aren't a whole lot of unfollowed ones left.

No no no, the Yehat give up to six ships.
"Sentient life. We are the Ur-Quan. Independence is intolerable. Blah, blah, blah." - the Spathi High Council, Star Control II.
Top
Post Reply
1542 posts