And the activated PDL, especially with Hunam captains flying close to the screen border, often also depletes the battery because some haphazard piece of rock got too close and triggered the PDL....
"LAUNCH FIGHTERS!"
Top

The Troglodyte wrote:I’ve also wondered, why doesn’t the Ur-Quan launch a few fighters regardless? I know if I were in their shoes I would; detection of the PDL shouldn’t nullify fighters usefulness altogether. It at least gives my enemy something else to contend with, no matter how futile. Besides, it’s still a drain on power to activate the PDL, and if you’re lucky, you might catch them slipping and get in a few cheap shots if you release a few here and there as you look for an opening. I’ve used this strategy rather effectively against cruisers during my old SC1 days, who get put in the position of wasting energy against a couple of fighters (and further waste if the fighters have enough separation from each other that a premature activation of the PDL only takes out one) versus saving energy to launch a missile while your Dreadnought can come barreling in from the opposite side, although I’ll admit it is much easier to overtake a cruiser than a fully-equipped vindicator.

As always, take the I in SC2's AI with the whole shaker of salt. Tactics like these are way too sophisticated for its meager abilities.
Top

We had no trouble arriving in this new, unexplored system. Sure, on our way out of Theta Crateris we had to let a few Ur-Quan know (right before sending them into the caterpillar afterlife) that we didn’t really care if they thought we were infringing upon their Doctrinal War, and yes, we are certainly aware of the paramount importance it is that the Kohr-Ah must be prevented from winning at all costs, since it would mean the extermination of all life in this region –- not that living under red glowing planet-sized spherical shields can be compared with a trip to Disney World or anything!

We also detected more ships on our short journey here, so it would appear that the various forces are all converging on our position, which will make the prospect of making it to the next system (if needed) a dangerous task, although if it becomes necessary we can use the time portal to go back to when we first passed through the Q-space wormhole to get here.

Gamma Crateris is a white dwarf star with 9 planets: 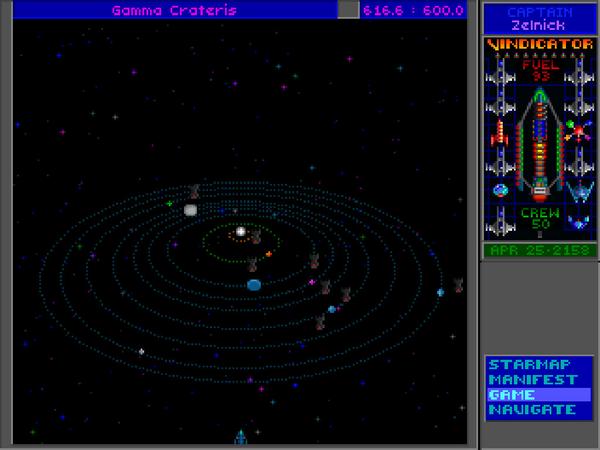 Man, talk about yikes! Yikes indeed! I have informed my brave crew and the rest of the fleet of our mission here and our intentions… intentions and objectives that will not be swayed, even by an entire fleet of Marauders!

If we have to we shall fight off every last one of them within this system, paving our way over the remains of every single squishy worm in this system as we search every world with a fine-tooth comb, overturning every rock, making sure the Sa-Matra isn’t hiding under one of them!

“I am the punishment of God… if you had not committed great sins, God would not have sent a punishment like me upon you.” ― Genghis Khan

We have entered orbit of a Selenic World with class 3 tectonics and 3 base metals and 1 Sa-Matra. Well, everything except that last part! 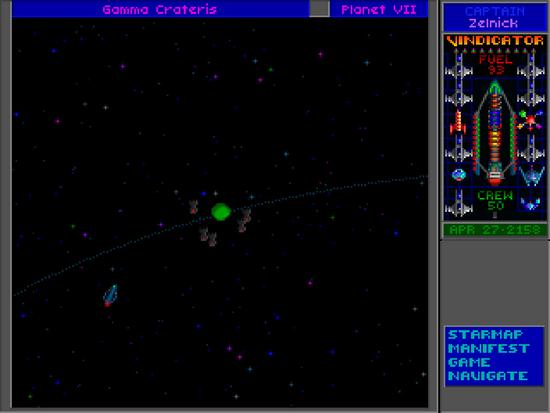 Well, the gig is up. The Kohr-Ah have detected us, and all of their ships are rapidly converging on our position.

Fortunately, we kited them around and made it to the planet without a skirmish, but unfortunately, the planet is only an Acid World with class 3 tectonics and 12 common minerals.

We tried to leave the vicinity, but there were still plenty of Marauders waiting beyond the planet like snakes in the grass… and then they attacked us! We brought in the Vindicator, and I felt confident in doing so after the most recent victories over our Ur-Quan foes, but the five Kohr-Ah vessels were much tougher than their Quan counterparts, and by the end of it all, we emerged victorious, but my ship had taken severe damage to the outer hull plating and several systems were malfunctioning, not to mention the tremendous loss of life.

We attempted to leave the area and transfer personnel from the Avatars, but our close proximity to the planet we had just left brought us back into planetary sensor range, where more and more Kohr-Ah kept flooding in; at which time I concluded it was going to mean more damage and more casualties, so I activated the time portal for when we were back in orbit of the Acid World.

This second time around, I decided to glide the flagship and fleet along the outer edge of the planet’s perimeter until all of the Kohr-Ah were visible on our short-range sensors. Then, after some more skirting, they were all clumped together and we made our move and successfully made it without having to battle our way through, and we’re now in range of the 5th planet, a gas giant with 2 moons.

The plan has worked so far. We escaped from the planet with the Kohr-Ah behind us far enough so that once we left the outer region of the planet we had sufficient time to engage the impulse engines before the Marauders could catch up and prevent us from leaving the area.

We explored each of the 2 moons; one was a Treasure World with 13 precious metals while the other was an Acid World with class 4 tectonics and 16 common minerals -- and we scanned the white gas giant as well but found nothing unusual.

We then proceeded to the innermost planet, which had previously been obscured from our sensors during our preliminary scans upon system arrival due to its close rotation to the sun, but our scanners showed it to be a medium-sized green planet with 2 other moons.

We continued to implement the same strategy by allowing the big Kohr-Ah group to catch up before moving on to the next planet, followed by flying in a circle far around the range of the planet, and then kicking into high gear when we were certain we could escape: 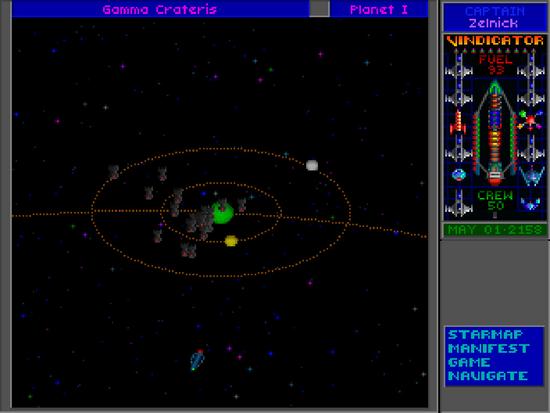 After once again evading the Kohr-Ah ships, we have entered orbit of a Metal World with class 7 weather, class 3 tectonics, 3 corrosives, 8 base metals, precious metals, 1 radioactive and 10 biological lifeforms.

A slight oversight!… I should’ve also included the planet’s temperature of 140° Celsius! The little lava spots popping up was a bit of a surprise, but the real danger came from the sky; the class 7 weather of the planet produced violent electrical ion storms that zapped the lander repeatedly, until unfortunately a few away team members perished from electrocution when the lander’s shield couldn’t handle the overload of surging energy.

The lander stayed on the surface for a short while longer to verify the type of lifeforms that were present, and after they determined all ten of the lifeforms were the blue and grey slow-moving radial-tentacled animals, the landing party returned to the ship.

We weren’t certain of our next destination, since we were still at medium scan range, which didn’t show most of the planets nearby, so I took a quick look at the system scan when we first entered the system and noticed the 3rd planet to be closest, so we set course, and have entered orbit of a cyan Gas Giant, but there is nothing unusual about it, plus it has no moons to explore, so we’ll be moving on.

We have entered orbit of an Yttric World with class 4 tectonics, 1 base metal and 3 rare earths, so we’ll be moving on.

The 6th planet was just a Xenolithic World with class 4 tectonics, 2 base metals and 1 precious metal, and it also had a moon, which we’ve just entered orbit of, but it turned out to be a Halide World with 2 corrosives and 2 radioactives, so we’ll be moving on, as soon as the Kohr-Ah fleet catches up.

We have just entered orbit of another Xenolithic World, and this one has class 4 tectonics and 3 base metals, which concludes our exploration of this system.

We have had repeated engagements with both the Ur-Quan and Kohr-Ah, and our fleet has been depleted and the Vindicator has been severely damaged.

After departing Gamma Crateris, we were immediately confronted by a pair of Dreadnoughts, which the Vindicator handled with no problem, but it allowed the other ships nearby to catch up as others popped up into HyperSpace close by as well, and we were soon fighting for our lives continuously, with each fallen squadron being replaced by another, with a mix of Ur-Quan and Kohr-Ah battling one another for a shot to take on the rebel humans and company. 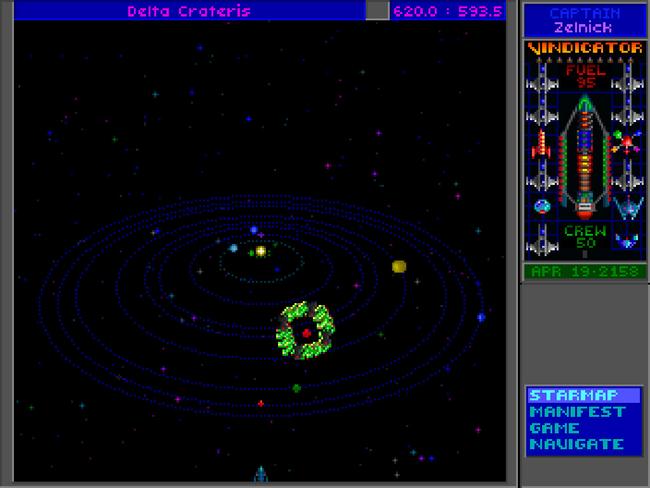 It's… a giant pokéball!
Top

The Troglodyte wrote:Uh… yikes! Something tells me I may have found the Sa-Matra. Captain out.

*grabs a bag of popcorn*
Top

Can you defeat the defending forces?

Who could help you?

Walks off to the kitchen to pop some.
Top

They are probably just in line for soft pretzel day. It's nothing to worry about.
"What's the point in being grown-up if you can't be childish sometimes."
Top

So it begins...
"Sentient life. We are the Ur-Quan. Independence is intolerable. Blah, blah, blah." - the Spathi High Council, Star Control II.
Top

palmpet wrote:They are probably just in line for soft pretzel day. It's nothing to worry about.

PSST. The title of this thread specifically forbids spoilers!

Maybe he just stumbled over a ritual fight in their doctrinal war.
Done like "musical chairs" (a.k.a. "Trip to Jerusalem" or "Trip to Rome"), every once and then the music stops, and they all rush for the free seat. The non-sitting ones need to leave.

From the image it looks like the Kzer-Za are winning. Currenty having a ratio of around 3:1 battlegroups.
Top
Post Reply
1542 posts